2018 presents very positive figures from SMEs and ISEs based in France, as was the case for 2017. Indeed, supported by an economic environment that remained sound, and external financing conditions for businesses in France that were still very favourable, new records were set with a boom in business start-ups and private equity fund-raising, record highs for SME participation in public procurement and exports, and strong growth in their use of factoring, the Innovation Tax Credit, and patent applications, among other highlights.

With a sound economic environment and very favourable external financing conditions, 2018 presents very positive figures from SMEs and ISEs based in France. Featuring a boom in business formations and private equity fund raising, plus a high level of SME involvement in public procurement and exports, the following is a situational analysis of French SMEs in 2018, accompanied by some key figures, all available to download free of charge. 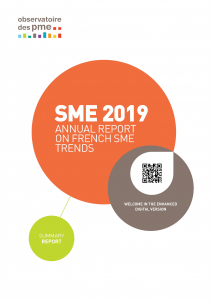 Many countries have found it an economic and political necessity to have an overview of the SMEs. Here is the SME 2019 report, the Bpifrance SME Observatory’s fifteenth annual report on trends in SMEs and ISEs in France. It contains a wealth of economic and financial analyses of their developments in 2018, supported by data series covering the past five to ten years to better understand how their situation has changed over time.

To keep up-to-date with the analyses produced by the French SME Observatory:

Click here to see the previous editions of the SME Report in English.